One morning last week, I woke up, washed my usual backlog of dirty dishes from the day before, and happened to glance at my hand. There on my right thumb were two small holes – one had broken skin with the red showing through, and the other was only flaking. As I tried to figure out any way that a pair of tiny round holes could be caused by anything other than two small teeth, I realized that it was time to get a rabies shot. Did my dogs get a little overzealous welcoming me home from my late-night drinking the night before? Did a rat sneak into my bedroom and bite me in my sleep? Either way, it was off to the Animal Bite Clinic for me, or there was a small but meaningful chance that I could die in one of the worst ways imaginable.

As a child growing up in Austria, or wherever, I was dimly aware of rabies as something cartoonishly scary but pretty much non-existent, like the Black Death or the Zombie Doom Virus. In the West, rabies is presented as a hilariously implausible threat in cartoons and comics, where frothy-mouthed dogs are offered to us in the spirit of animated whimsy.

Rabies is also treated as a punchline in live-action media like Fun Run, an episode of the American version of The Office. In that episode, a lot of mileage is derived from bumbling office head Michael Scott trying to organize a fundraiser for something that presents no threat to anyone, and has in any case already been cured.

After spending some time in the Philippines, it belatedly dawned on me that things aren’t so simple in much of the world. For example, such is my naivete about the state of global health that I only recently discovered that Polio is still very much a thing here and in many other countries – something that would’ve never occurred to me with all the back-patting done over its elimination in the West; ditto for leprosy. But the slowest and scarest awakening involved my realization that rabies is not a joke.

Soon after my arrival, I noticed the scary-looking posters around Philippine cities and towns reading Ang Rabis ay Nakakamatay! – “Rabies causes death!” (or something like that – apologies for my typically inept Tagalog). However, the fear-mongering merely came across as amusing, like a poster telling people to eat limes to avoid getting scurvy.

All of that changed after several years when I started looking for a new dog while living in Davao City. My first dog was part of a package deal, so to speak: she was guarding the house I rented, which had been unoccupied for several months, and when the landlady asked if I wanted to keep the dog, I half-heartedly answered that I would try for a few days. Within 48 hours our bond became inseparable, since I’m a huge dog-lover and she turned out to be, in spite of all her skittishness after tons of isolation and a little bit of abuse, a huge cutie-pie. However, I had been taking several long trips within the Philippines and around Southeast Asia, and although my retired next-door neighbour did a great job of taking care of her, I could see that the renewed isolation left her very distressed. So, after plenty of procrastination, and with a week to spare before my next big trip, I grabbed the next dog that was handy: a scruffy, tailless little 1-month-old mongrel puppy, which my neighbours were quite happy to get rid of without cost. (Not to say that they simply discarded her: the owner was a very sweet lady, and I like to think that she expected that I, with my neighbourhood reputation as a dog-spoiler, would give a good home to the little puppy. Sadly, Philippine mongrel dogs, or “askals” – which literally translates as “street dogs” – tend to be abused much more frequently than “higher-value” purebreds.)

Raising a puppy for the first time involved a very steep learning curve. The main challenge was feedings: I had gotten accustomed to giving my older dog one heaping bowl of feed each day, which seemed like more than enough to keep her fat and happy. As I learned from the constant crying, my one-month-old puppy demanded that she be fed at least three times a day. The sight of this scruffy little critter gobbling up a bowl of food half her size in a few minutes was truly something to behold.

One morning I was feeding my dogs a bit of leftover barbequed chicken gizzard. The older dog, in spite of being a certified sweetheart, can really be a bitch sometimes, and her huge, snapping jaws intercepted every single morsel of meat that I tried to drop in front of the poor, starving pup. Quite fed up with all this bogarting, I tried to bring one piece of gizzard closer to the little one’s mouth. Mad with hunger and too young to know better, she chomped down on both the piece of gizzard and the tip of my finger.

As I examined the wound, it didn’t seem to be too big a deal. Only one or two droplets of blood made it out of the wound, and it would heal in no time. But over the next few hours paranoia began to take over, helped along by the great paranoia-enhancer, Google. I learned that even a superficial dog bite could potentially spread rabies. I learned that although the puppy of an immunized dog is probably immune, there are no guarantees. And most of all, I learned that rabies has a 100% death rate and left untreated, and is an especially awful way to go: as the virus works its way through the central nervous system up to the brain, fevers and trembling make way for aggressiveness, irrational behaviour and fear of water, followed by disorientation, loss of consciousness, paralysis, and finally death.

Luckily, it turned out that the scary rabies posters were speaking to a larger truth: public health officials in the Philippines take rabies seriously, and have taken great strides toward eliminating it. To put my mind at ease, I traveled to Davao City’s Animal Bite Clinic, and was impressed by how organized and efficient their clinic was. I got a rabies shot, as well as one for tetanus – another awful way to die, albeit one that even westerners know to take a bit more seriously. I dutifully returned for my followup shots over the next few weeks, my puppy grew into an adorable adult, and I lived to tell the tale – even if my dog’s continued existence constitutes a constant reminder that I totally wasted my money on those vaccinations! 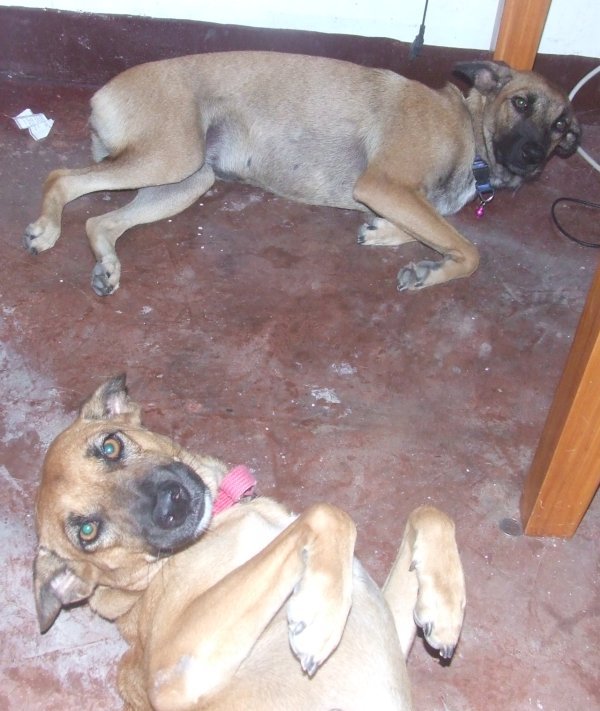 Given my fondness for sticking my hands near the mouths of dogs, it was only a few more months before I was back at the Animal Bite Clinic. During that time, I had started hanging out at the house of some impoverished but very hospitable producers of tuba, or coconut sap wine. When it’s freshly tapped, this naturally carbonated beverage tastes a little bit like a Filipino version of champagne. (And, yep, you guessed it: That’s a topic that deserves its own blog post at some point in the future, as well.) Although most customers buy tuba for takeout in one-gallon jugs, the friendly owners were nice enough to pull up a dusty old monoblock chair and convert their yard into an impromptu tuba bar.

I spent many happy afternoons on the plantation, sipping tuba under the palm trees, visiting with the family, eating barbequed chicken necks and practicing my eternally rusty Tagalog. I also found myself frequently confused by the family patriarch’s constant lapses into Cebuano while conversing with me in Tagalog, in spite of his knowing, somewhere in the back of his head, that I barely speak a word of Cebuano – typical of Davao City, an alphabet soup so rich and hearty that the locals often lose track of which language they are actually speaking.

One of the main attractions at the tuba plantation was the great menagerie of critters that they had wandering about. Cats, dogs, chickens and pigs in most cases roamed freely around the farm, coexisting in Utopian harmony. One afternoon, I saw a puppy ambling past and couldn’t resist the urge to pick it up. The puppy was dirty and not especially well-cared for, but, like all puppies, was much too cute to not pick up. Unfortunately, it didn’t seem to be too eager to stay on my lap, and showed its disapproval, as puppies often do, with a bite.

Back to the rabies clinic for me, I thought wearily. The family could only feign mild concern over my rabies paranoia, not sharing my big-city fixation on infectious diseases. Their daughter, who doubled as my English-to-Cebuano translator, dutifully put up with my paranoid inquiries about the puppy’s health and behaviour. And then, midway through my new course of vaccinations, she offhandedly sent me a text message informing me that the puppy had gotten sick and died, all without too much fuss. If nothing else, her offhanded attitude toward this was a wakeup call to my stereotypically western animals-are-children attitude. Understandably, her family was too busy trying to afford human health care to bother taking one of the many wandering critters from their property off for an expensive veterinary appointment.

A dead dog meant yet another rabies shot, as well. Unfortunately, the puppy had already been buried, and I could not fulfill the Animal Bite Clinic’s sensible request that I bring them the dead dog’s severed head in a bag of ice, so that they could test its brain for rabies. If nothing else, it would have made for a great conversation piece on the jeepney.

I entered the world of Competitive Rabies Avoidance nearly 2 years ago, and have since managed a personal best of almost 1 1/2 years without a rabies shot. Excellent! Unfortunately, my hot streak was broken last Friday with the twin love bites on my thumb. After giving the parasite a few days to draw ever closer to my brain, I hopped on the jeepney to get my first taste of rabies prophylaxis, Manila-style. I literally ran uphill to the rather imposing hilltop Research Institute for Tropical Medicine, rushing sweatily up to the reception desk in the hopes of getting onto the patient queue before the cutoff time. After a few hours of being stared at by little kids who had been bitten by dogs, I made it inside and had my paranoia injected away. As a Champion Loser-of-things, I also managed to misplace my old vaccination records, meaning that I would be officially required to get the full three rabies shots instead of just a booster. Soon my veins will be filled only with rabies vaccine, and I will be able to inoculate people by bleeding on them! That’s the dream!

While I was chatting with the clinic staff, one of them helpfully offered to set me up with one of her co-workers. She also suggested I could get to know more of the cutest staff members by going to Korea, coming back, and being quarantined for MERS-COV virus inside their hospital. “There’s gotta be a better way to meet women,” I objected. We all laughed – I assume that’s the kind of humour that helps people get through their day while working in a facility that specializes in scary-ass diseases that kill people in horrific ways.