As white males go, I consider myself to be a relatively enlightened. If I weren’t such a stickler for grammar, I might even say that I’m woke. My Asperger’s likely makes me appear dispassionate and unsympathetic, but it’s really a two-edged sword in the best possible way: my condition also makes me aware of the irrationality of prejudice, while also helping me understand – at least as much as an otherwise very privileged middle-class white male can – what it’s like to be pushed aside as the other. (Here I am avoiding the extraordinarily loaded “d” word.) Or, to put a far more sinister spin on it, the terrible narcissism that arises from my condition and divides the world into me and all the not-mes also has the side effect of putting all of the not-mes on a roughly equal plane, regardless of their sex, race, and so on.

But in spite of all my aspirations of wokeness, I had a rude awokening a few months ago thanks to an update of WhatsApp that got auto-downloaded onto my clunky old smartphone. Amazingly, in spite of its cringeworthy name, this application has become a key part of both Facebook’s fearsome information monopoly and my chat-addicted life. Along with Facebook Messenger, it has become indispensable for me in staying in touch with my far-flung network of intercontinental friends. Between the two apps, most of my non-work communications apparently pass through the hungry maw of the Facebook monster – but hey, gotta help my autistic brother Zuck out, right?

Anyway, I hope it won’t be too “racially divisive” to point out that, numerically speaking, after ten years spent living in Asia and meeting the nicest damn people in the world in Mexico (see my upcoming post, Mexicans: The Nicest Damn People in the World), at least a slim majority of my friends are, well, not white. Though I won’t flatter myself by saying I’m colourblind (because who is?), I like to think I never put much thought into it. That is, until my friend (who, if it matters, is a Malaysian of Indian descent) sent me the emoji with the curled fingers in a WhatsApp chat. I’m embarrassed to admit that I have no idea what this gesture is called, but you know the one:

Except, unlike the one pictured above, this particular emoji was customized to match her skin colour – a feature that had only been added in a recent update of the app. 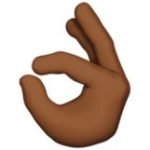 The effect was jarring, and my feelings of surprise sent me on a rapid but nonetheless genuine journey of soul-searching. I asked myself why I felt such surprise. I knew (or I’d like to think I knew) that it wasn’t outright bigotry on my part, but I also knew I couldn’t simply chalk it up to surprise. Heck, it wasn’t even the first time I’d seen a non-Caucasian emoji – WhatsApp had allowed certain emojis to be customized in this way for a while, including one of my personal favourites, and the only Santa I ever use, Black Santa:

But this was different because it didn’t have a face. It wasn’t representing an entire person – it was something abstract, separated from any individual human being. And it occurred to me that what really gave me a jolt was that the skin colour of this abstracted emoji no longer felt “neutral” – it now felt tied to an individual person. And then I felt shame and amazement over the fact that I, in spite of all of my efforts to not discriminate against my fellow human beings, had still internalized the notion that white skin colour was somehow neutral, somehow the default.

In spite of all of the efforts to root prejudice out of my life, this single hand-curly emoji (what the hell do you call that thing?!) single-handedly made me realize how far I have left to go. As long as people in positions of privilege – whether it is white privilege, male privilege, economic privilege, passport privilege, non-autistic-weirdo privilege, or any other form of unearned advantage over another group of people – violently insist that they are “colour-blind”, “gender-blind”, or what have you, brown curly-finger emoji shock will remain the tip of an iceberg of far deeper systemic inequalities. Multiethnic emojis aren’t just symbolic (well, they are, but you know what I mean) – they have the power to make those who have felt excluded from the “default” feel like they equally belong, and can hopefully make those who have taken being the “default” for granted examine their underlying assumptions. Because if we can’t examine our blind spots – even the most well-intentioned and least hateful ones – there’s a hard limit on how equal this world can become.

So, I’ll own it: I’m a white middle-class male, and although I may know more than a few other white males about what it’s like to be looked down on, it was still totally uncool of me to think that white or Caucasian-pink was somehow the “default” colour for faceless hand signal emojis. I, for one, embrace this bold new Benetton emoji world.