As much as possible, I like to buy my fresh produce in Manila at the traditional market (or palengke) instead of the supermarket. I don’t do this as an affectation or an attempt to be “quirky”, and I don’t do it out of a desire for authentic cultural experiences. After having lived here for this long, I am no longer searching for the exotic, and at this point pretty much everything feels normal to me, anyway – it’s just my everyday life.

What remains, however, is an appreciation for the friendly, casual chaos of Manila street life, with vendors crowding the sidewalks and shouting out alluring descriptions of their wares. I like it even more when I compare it to the stifling corporate culture of the malls and supermarkets. Market vendors are more fun to talk to and more likely to joke around with me (even if it’s at my expense), without fear of being fired by their malevolent corporate overlords and quickly replaced with another minimum wage-earner in the single-minded pursuit of maximum profit.

Plus, the vegetables at the market are fresher!

When I want to grab a few things in a hurry, there are plenty of vendors in my neighbourhood that will do the trick, including a small local market. But if I feel like buying so many vegetables that I risk tearing the straps off my heavy-duty eco-bag, I usually go to the Alabang Public Market. The Alabang district of Muntinlupa City is known mostly for housing old-money types in high-end, heavily fortified gated communities like Ayala Alabang; it’s also becoming increasingly important as an up-and-coming business district. However, away from these moneyed enclaves and closer to the expressway, you will discover that Alabang also boasts plenty of lively street life, from a seemingly endless supply of sidewalk sock vendors to the charmingly dodgy karaoke bars and surplus TV stores that lurk underneath the viaduct. Best of all, you can experience it all without some of the more pungent odors that your nose might pick up in more crowded areas of Manila.

Alabang is just a short ride from my house, so let’s go!!! And buy some beans!!!

To get there, we hop on a passing jeepney along the highway. Given the swarms of jeepneys that dominate the roads in the Philippines (and have earned them the moniker Kings of the Road – and verily, they are cruel tyrants), it’s not a long wait. In fact, if you have to wait 3 minutes for your jeep to come in Manila, you’ve waited too long! Sorry, sucker! 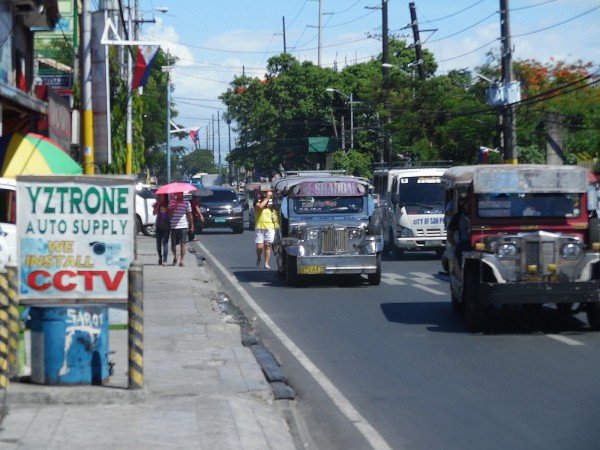 We’ll be taking the expressway to reach Alabang without getting caught in Manila’s notorious traffic, and not just any jeep is street legal for that purpose. Only jeepneys with jerry-rigged gates at their rear entrances are judged worthy to pass through the Gates of Toll, presumably so that passengers don’t simply slide out the back at 80 km/hr – something that would certainly be within the realm of possibility. Interestingly, each expressway-ready jeepney gate seems to be a unique piece of hand-made craftsmanship. The number of different ways that they slide, lock or are tied into place is truly impressive, like an infinite number of unique and precious snowflakes that allow public utility vehicles to legally travel in the winter wonderland of the expressway. The jeepney driver brusquely instructs the passengers to close the gate before the jeepney enters the expressway, and the passengers closest to the back are stuck having to fumble their way through each completely unique door-closing mechanism. 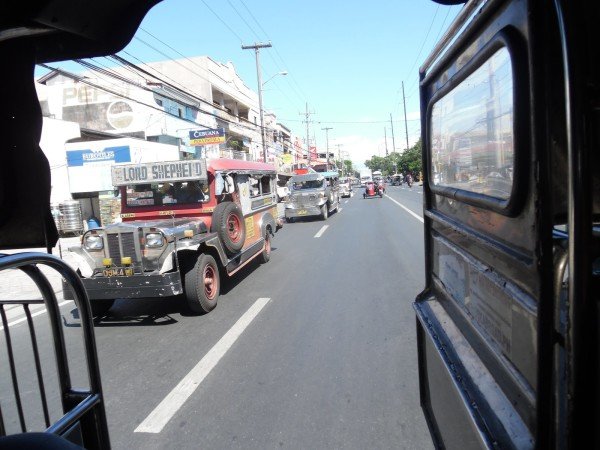 Soon enough, we have proven ourselves Pure of Heart, Closed of Gate, and worthy to journey along the Way of Express. We are off like a greased bullet, mercifully bypassing the traffic-snarled nightmarescape of Muntinlupa’s National Road, which technically runs parallel to the expressway, but in reality, tends to not run so much as crawl. 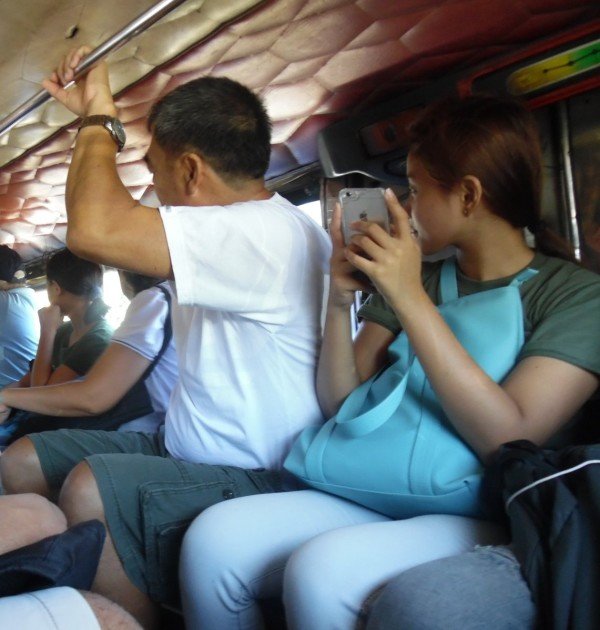 After feeding our need for speed for a full 5 kilometres, we arrive fully satiated at the toll gate. We climb out, gaze in awe and wonder upon the hulking concrete beast that is the Alabang viaduct, and cross the pedestrian footbridge. 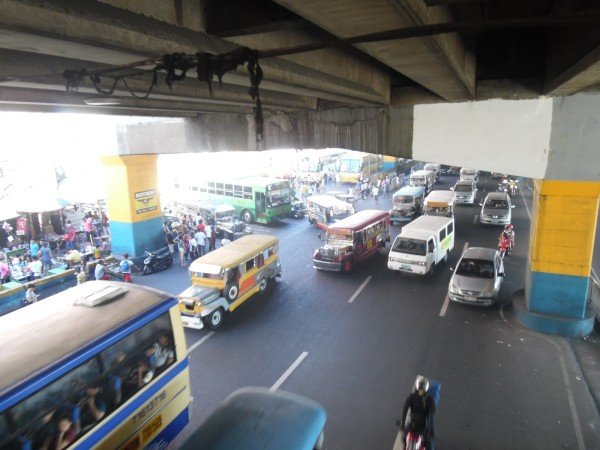 Things start to get greener as we move away from the Expressway, even as our sunglass-shopping options grow ever more numerous! 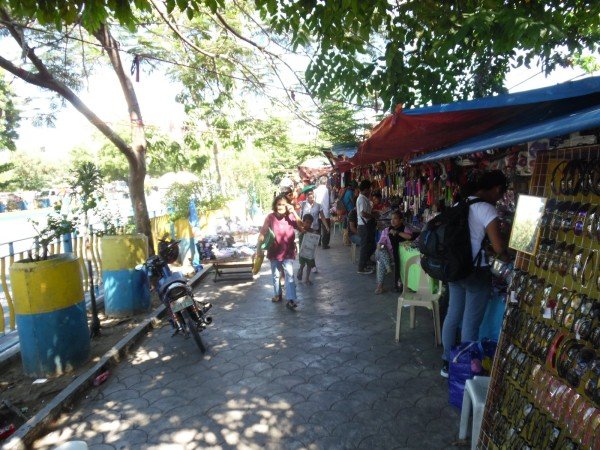 As we cross the footbridge to the market, we catch a glimpse of Alabang’s burgeoning business district. But that would be the topic of another, much less interesting blog post, so we journey onward! 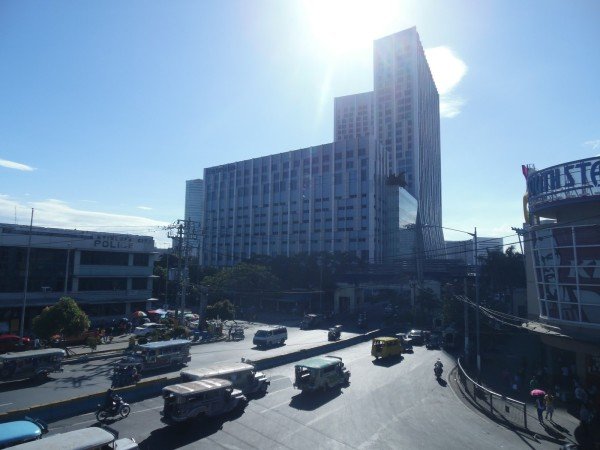 Finally, the Alabang palengke is within sight. The official name is Pamilihang Lungsod ng Muntinlupa, “pamilihan” being a synonym of “palengke” and an heir to the rich tradition of Tagalog words that nobody ever, ever uses in daily conversation. 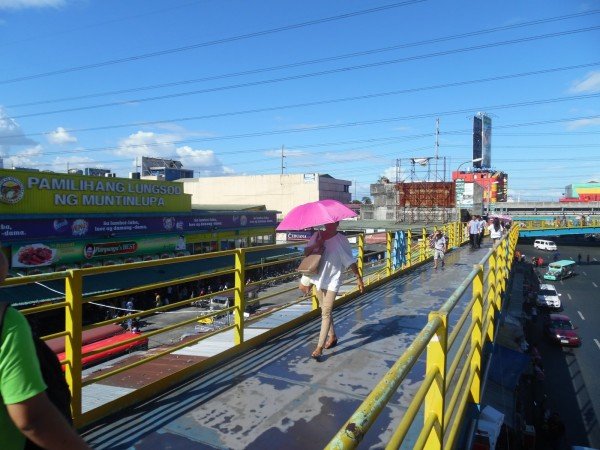 I’m not attempting to provide my readers with a comprehensive tour of the market, which features two separate areas for vegetables, tons of tasty fruit, endless bloody masses of meat, heaps of fresh seafood, and also housewares and other things are that are inedible (and therefore IRRELEVANT). All I really wanted to do on this trip was pick up a few items, and snap a few pictures along the way.

I stop to photograph some rice vendors and their dizzying array of rice varieties. Different varieties are classified as masarap (delicious), malambot (soft), mabango (aromatic), or some combination thereof. For true rice enthusiasts, you can even complete the trifecta of masarap-malambot-mabango by purchasing Thai Jasmine Rice… but that’s not a decision to be taken lightly, because it’ll cost you! 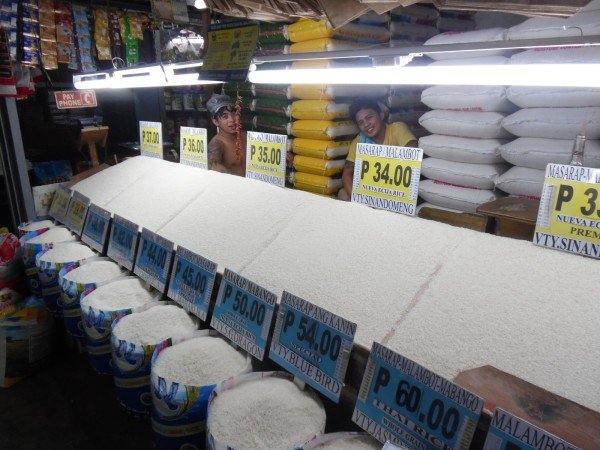 I stop to pick up a slice of insanely addictive rice cake, one of the many varieties of bibingka in the Philippines. The bottom layer is sticky rice, generously topped with a thick dollop of latik. I’m still not entirely sure what latik is, but according to Wikipedia, it’s a type of coconut curd. What’s most important, however, is that it tastes incredibly good – with a rich, decadent, buttery flavour – and is, I am sure, incredibly bad for you. Nonetheless, I am willing to surrender fully one half of my arteries in exchange for the creamy ecstasy of latik-laced desserts – and if you knew how they tasted, you’d probably feel the same way.

For a while, I wondered why I always heard the same Tagalog rap song whenever I visited the market. The only lyrics I understood were the insistent repetition of “Sampung piso lang!”, or “Ten pesos only!” Given the menacing tone of the song, I assumed it was a gritty reality-rap slice of street life, detailing how desperate the protagonist was for even just 10 pesos (or about 20 cents U.S.) – a sum worth killing for! Imagine my embarrassment when someone explained to me that it was just a jingle for a store that sold a lot of items for 10 pesos.

The hard-working vendors in Alabang Palengke have done lazy, chopping-averse cooks like me a huge service with their huge array of pre-chopped convenience foods. The market is a great place for slow-moving lazy-asses like me to pick up pre-chopped string beans, squash, garlic, or bitter gourd.

I love garlic man, because he sells me garlic! Since I discovered the joys of pre-chopped garlic, I have begun to use around three times as much garlic in my cooking as I did before. And as we all know, more garlic means more POWER!

For the many Filipinos who absolutely loathe bitter gourd and would say that it tastes just as bad as it sounds (although the Tagalog word, ampalaya, is far more mellifluous), I suppose getting it pre-chopped isn’t much of a convenience at all. But for me, I consider bitter gourd sauteéd with a big scoop of garlic, a mountain of fresh tomatoes, a few eggs, and a generous dash of fish sauce to be one of the great Filipino dishes – bitter, sweet, salty, and umami! And it has miraculous health benefits that I do not fully understand, as well!

For my last stop, I pick up some dried beans from another vendor – the rather arbitrarily chosen pretext for this entire trip. Like the other vendors, she is disarmingly happy to pose, and I get to marvel anew at how much stuff Filipino market vendors manage to dangle from their ceilings.

With my bag laden with bitter gourd, beans, and garlic that is rapidly oxidizing in the subtropical heat, I begin my journey home. On the way back to the jeepney, I stop to gaze in wonderment at the blazing bright flowers that adorn the aptly-named Fire Tree underneath a footbridge. Locals are amused to see a foreigner taking a picture of some dumb tree. 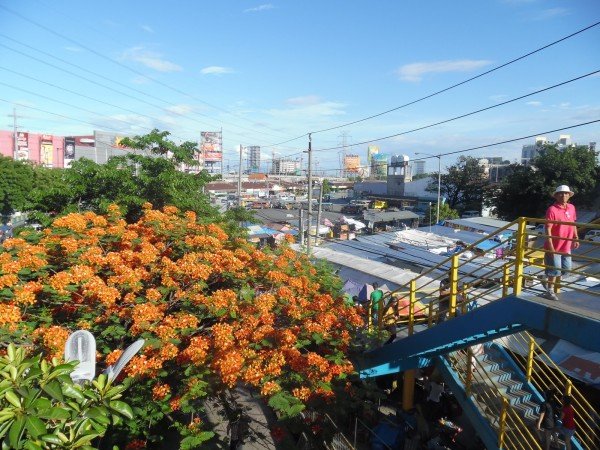 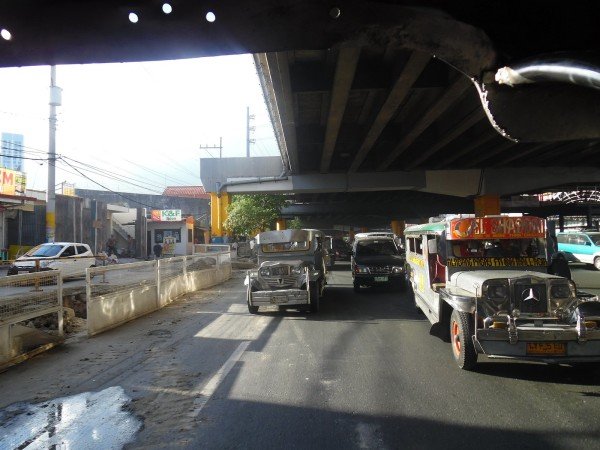 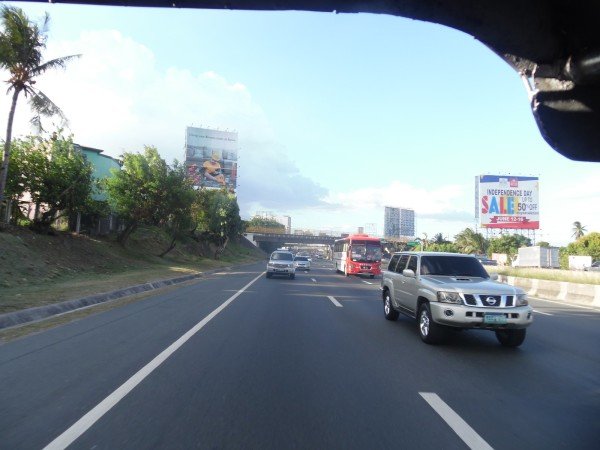 COMING UP IN A FUTURE POST: I cook beans! Well, maybe… if I can’t think of something better to write about.

2 thoughts to “Fun With Beans at Alabang Palengke!”