I reluctantly left the wonderful revelation that was Nicaragua and continued my headlong rush toward Mexico City, where I had a flight to catch a few scant weeks in the future. My next intended destination was Guatemala, but I had a small detail to reckon with: the fact that Honduras and El Salvador stood between me and my next stop.

Even after being surprised by the hospitality and safety of Nicaragua (except for certifiably scary-ass Managua), I was still bracing myself for the nefarious criminality of the “real” Central America. Even passing through Honduras and El Salvador, which boast some of the highest murder rates in the world, seemed to be tempting fate.

So when the time came to buy my bus ticket, I originally intended to make an 18-hour beeline directly from Somoto, Nicaragua to Guatemala City. It was only a rather limp desire to be a badass that eventually persuaded me to only skip Honduras and spend at least one night in San Salvador. Aside from my fear of a butt-numbing 18-hour ride, I think I wanted to experience the equivalent to staying in a haunted house for a night.

The morning of my bus ride came, and off we went! Since all the other passengers were from Central American countries which seemed to allow easy border crossings among their citizens, I got to experience the special distinction of being the only one who required a more elaborate immigration protocol, slowing everyone down in the process. Great success! Nonetheless, the border crossings went pretty smoothly. I was expecting whole packs of drug-sniffing dogs, but was surprised to see how relaxed and uncomplicated the process ended up being.

The bus passed through Honduras with nary a bullet whizzing by, and I soon found myself in San Salvador. Far from  the rootin’-tootin’ OK Corral I expected, the bus station ended up being in what was actually quite a posh area. The station, and my hostel a few hundred metres away, were located in the Zona Rosa, an area known for its high-end nightlife, its proximity to the houses of some of San Salvador’s wealthiest citizens, and its relatively low levels of murderousness. 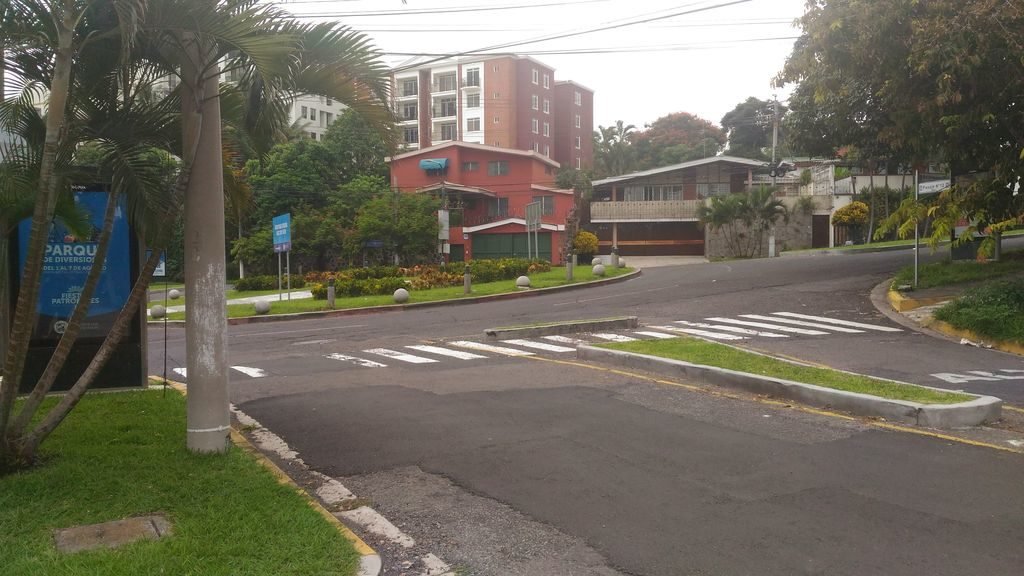 After checking in at the cozy hostel, my original plans of looking for Salvadorean pupusas got delayed by the presence of a button-cute French-Canadian girl in the lobby. I engaged her in conversation, and she quickly closed up her laptop and gave me unexpectedly rapt attention. Gazing at me with the sort of googly eyes to which I am not entirely accustomed, she asked me numerous questions with evident fascination, culminating within a few brief minutes in the dead giveaway question of “Do you have a girlfriend?” I answered no and, for some reason, quickly wandered off to prepare for my pupusa quest.

However, being completely unable to cope with the novelty of a Caucasian woman being attracted to me, I was not going to simply quit while I was ahead. Instead, my robo-autistic circuity malfunctioned, sending me into a conniption fit of sparks, whirring noises and verbal diarrhea. Heroically snatching defeat from the menacing jaws of victory, I couldn’t leave for my sightseeing without marching over to her dorm room and launching into an extemporaneous soliloquy about how I’m not used to white women liking me, what with my diseased autistic brain, and all. This worked about as well as you might think, and she showed no subsequent interest in my relationship status.

I could only console myself afterward by acting vaguely aloof in her presence, and engaging in the sort of passive-aggressiveness that we Canadians excel at. She was staying in the hostel for free because she was helping them do some online promotion while shooting drone videos of Central America. I got quite tired of hearing her drone on (ha!) about her drone videos with the tasteless exuberance of someone who is so vulgar as to actually do things and care about stuff. After she asked everyone else in the hostel to view a rough cut of her latest fast-paced video montage, she finally offered me that same honour. I took a gloriously petty pleasure in snapping “No!” without a moment’s hesitation, leaving her quite flabbergasted. So if nothing else, I at least handled rejection like a mature adult.

In spite of my bruised ego, San Salvador turned out to be a beautiful city. The aforementioned pupusa hunt was a much greater success than my attempts at flirting with the French-Canadian girl, yielding a bounty of oozing cheesy delights. I had heard tell of the deliciousness of Salvadorean pupusas from several countries away, but could never find anything that lived up to the legend… until I got to experience the real thing in San Salvador. These cheese-filled pancakes, sometimes with added garlic or beans, proved to be a cheap and addictive snack. The Salvadoreans who sold them were invariably kind and friendly people, which just made the deliciously melted-but-crusty cheese taste even better. They taste great with a cup of the mouth-watering and ubiquitous Salvadorean hot chocolate, too.

[No photo available – Apparently I was too busy eating]

The city is filled with eyecatching street art and some interesting architecture, with a highlight being the kaleidescopic church in the centre. 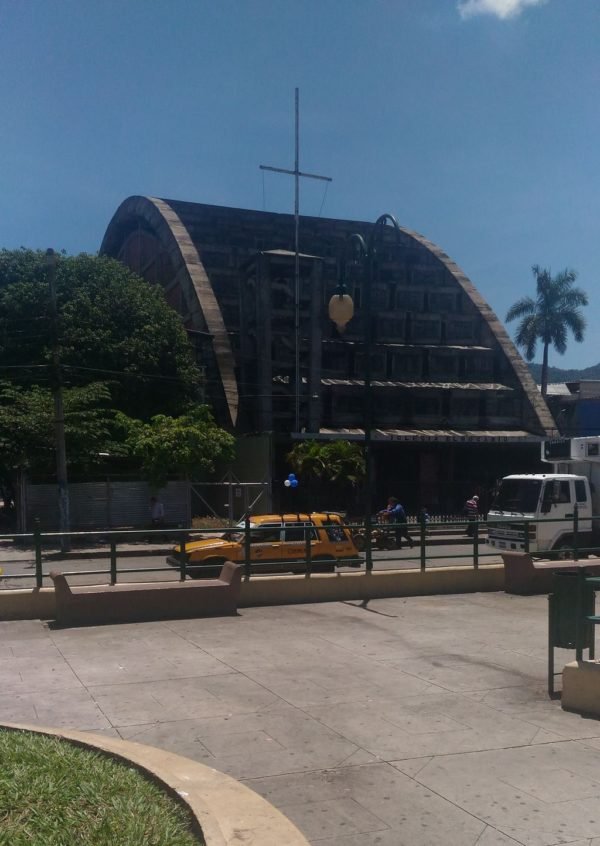 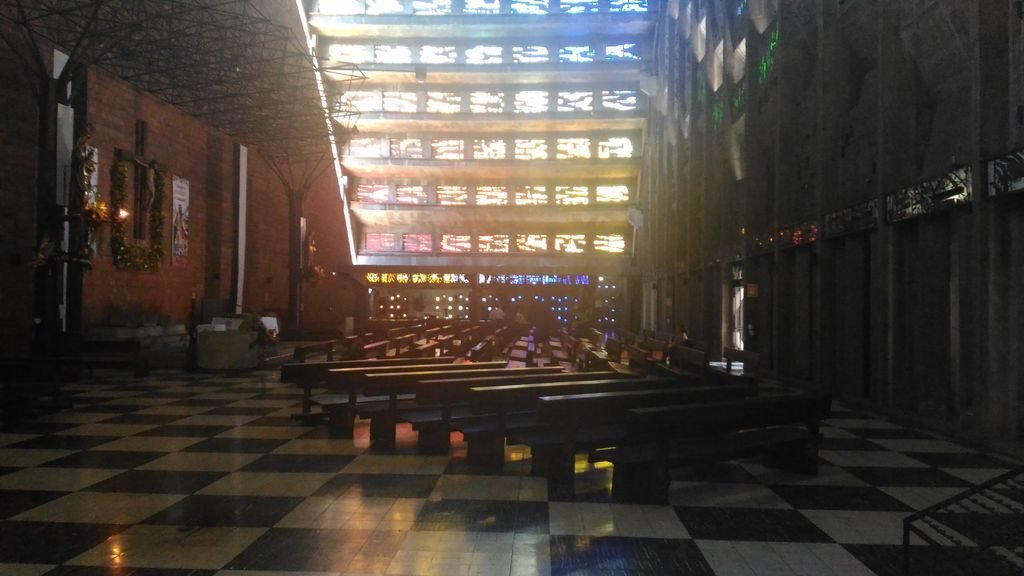 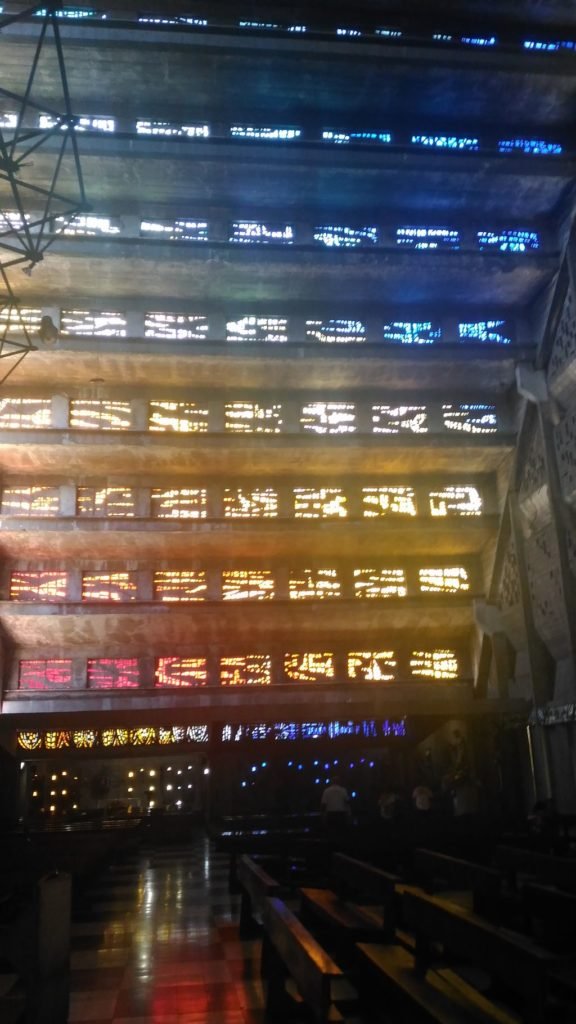 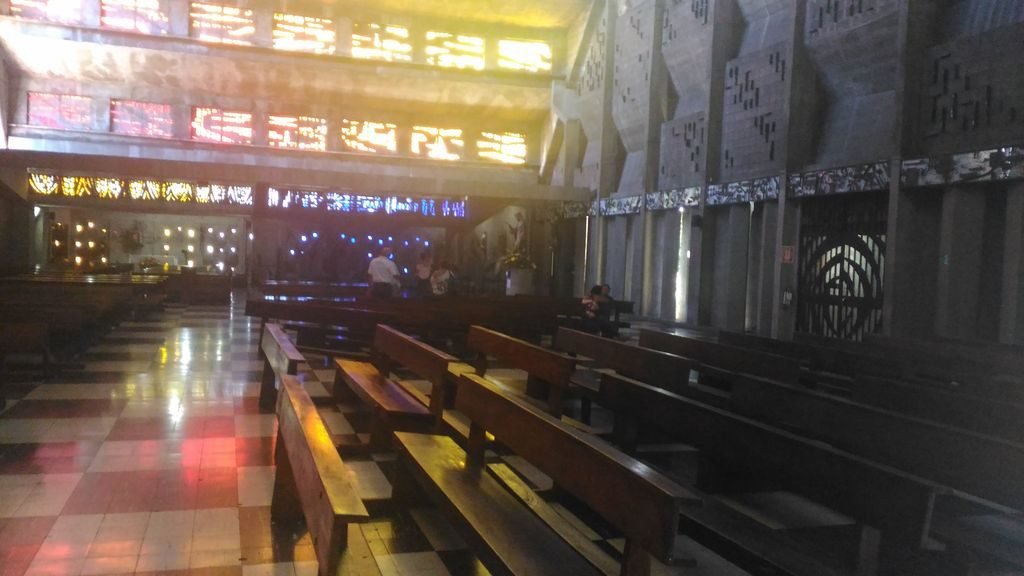 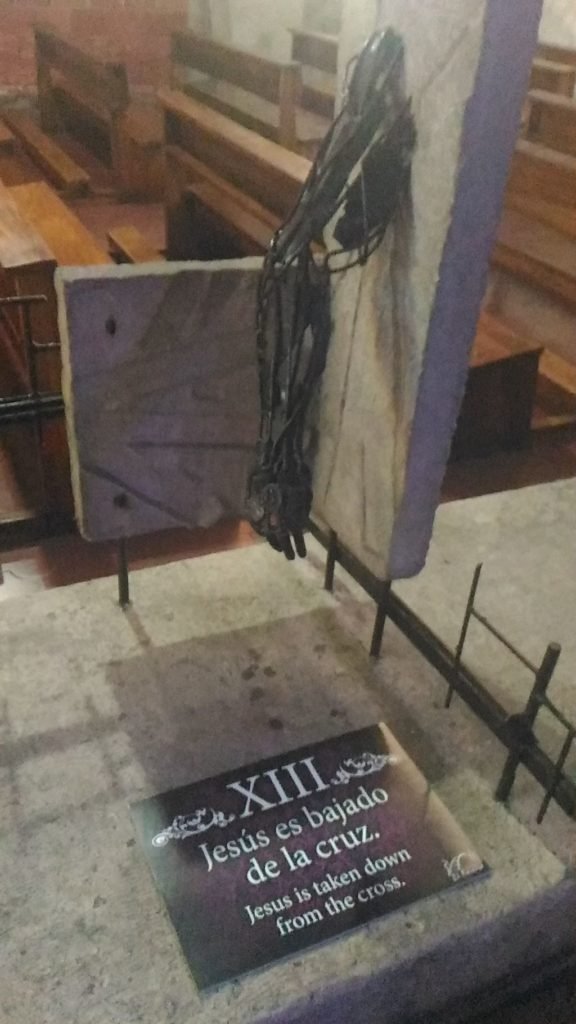 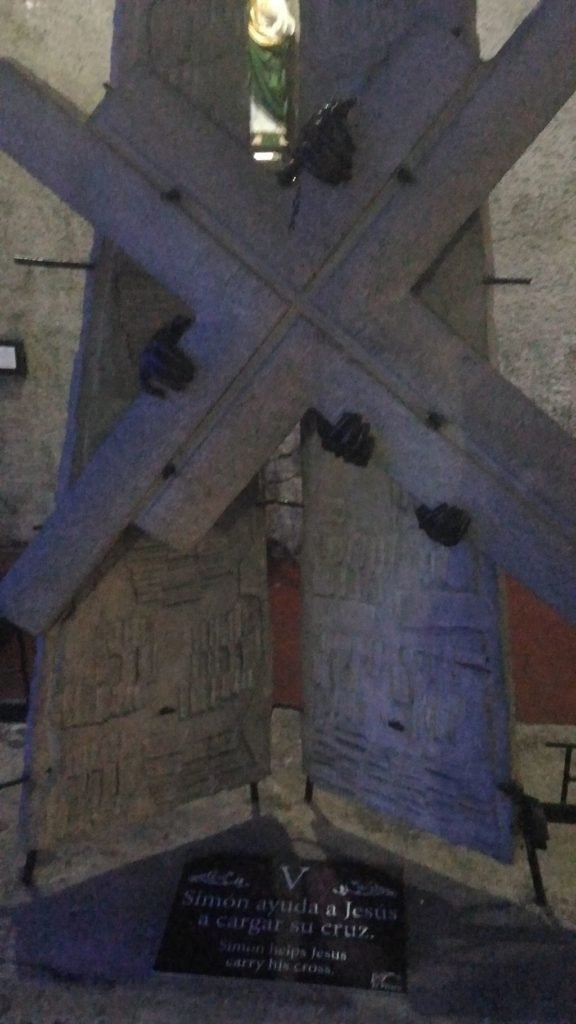 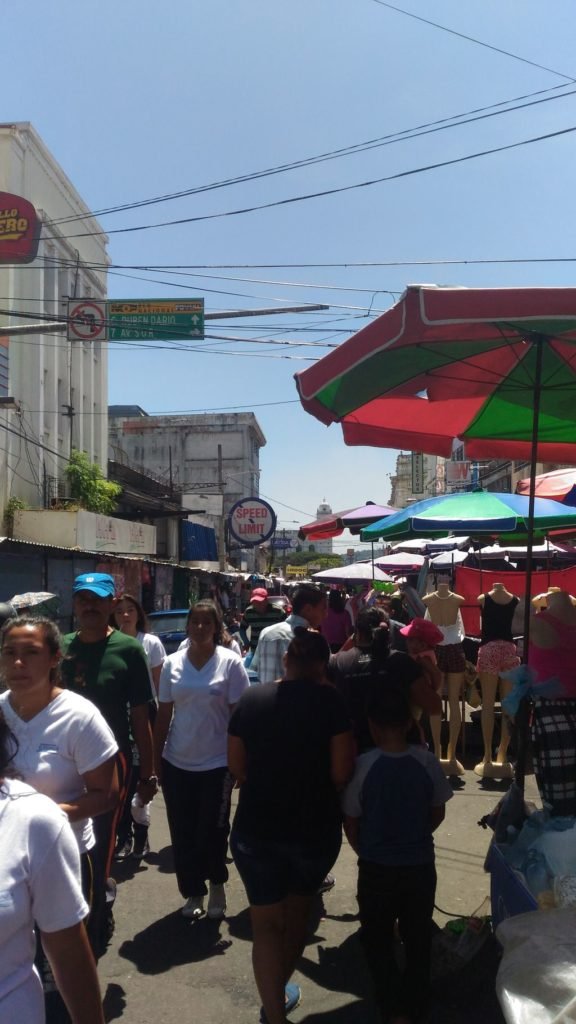 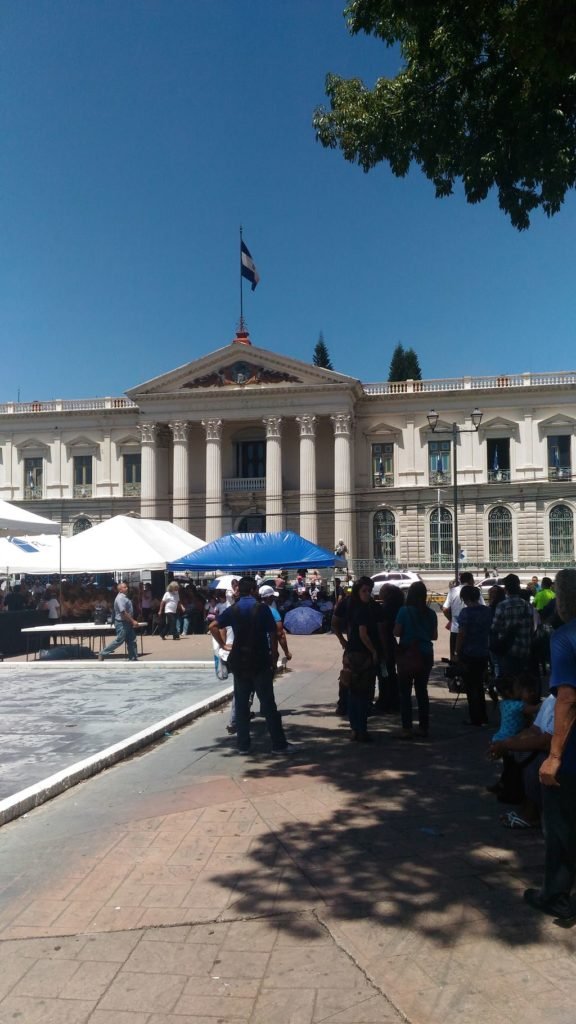 It was also humbling to visit the church that housed the remains of Holy Arch-Badass Oscar Romero, a great man who can even give selfish Canadian freelancers a faint idea of what it means to truly sacrifice for something great. 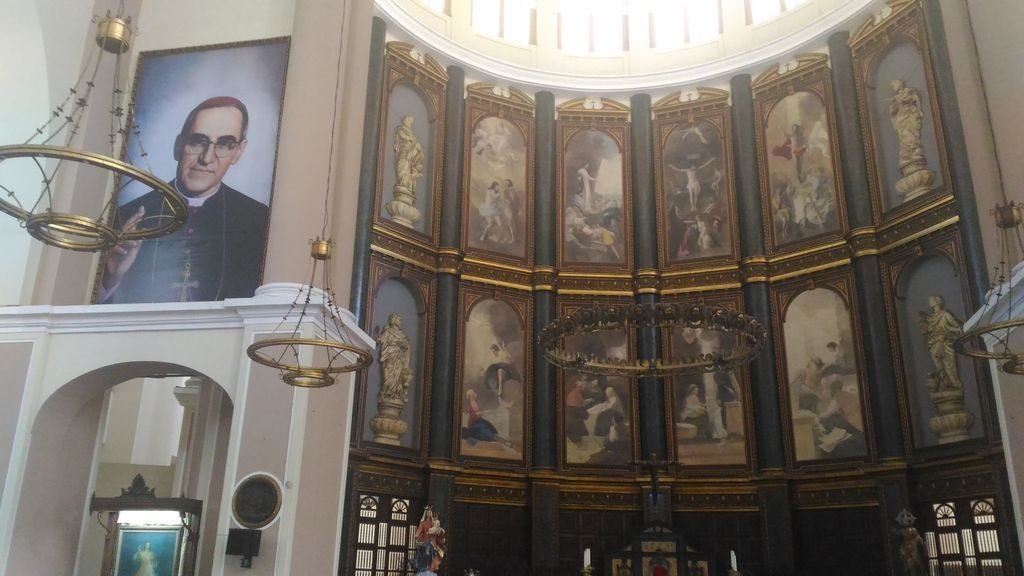 Overall, in San Salvador one jut gets the impression of being in a visually attractive city, something that was unfortunately lacking in other larger Central American centres. I don’t recall seeing a huge amount in the strictest sense of sightseeing, but I was utterly charmed by the good food, hospitality, and urban colour.

Also: the Wendy’s has an official Wendy’s foosball table, for some reason!!! 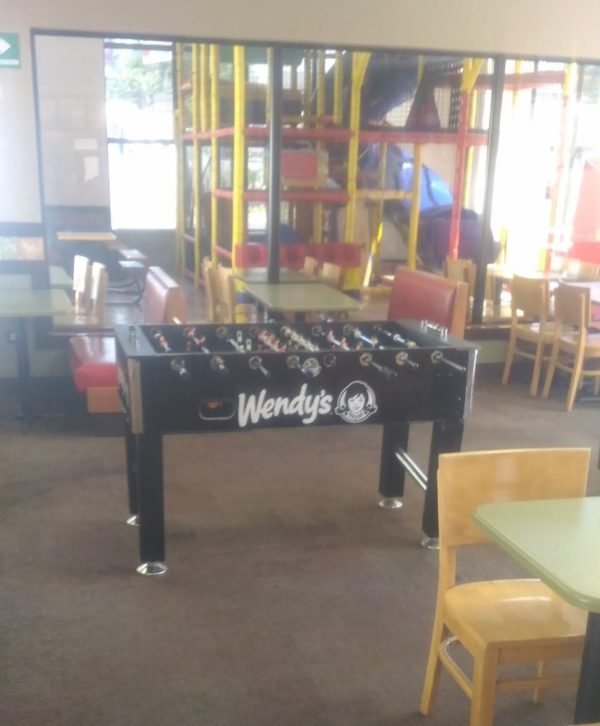 A lovely Salvadoreña and her friends also invited me to join her and some friends on their day trip to Ataca, a hilltop town where one of the friends had previously worked as a teacher. Flowers and street murals everywhere, with some nice views to boot! 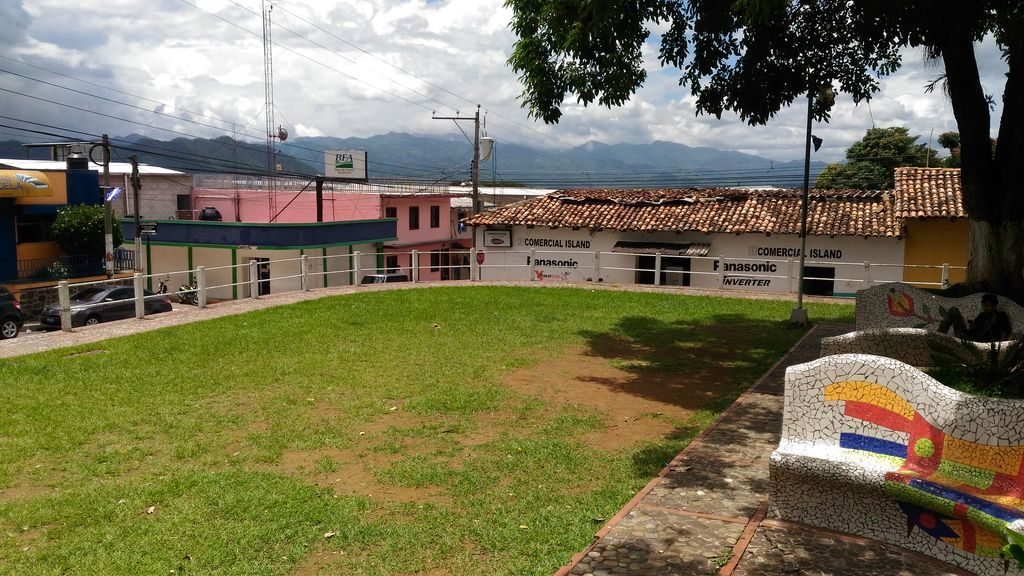 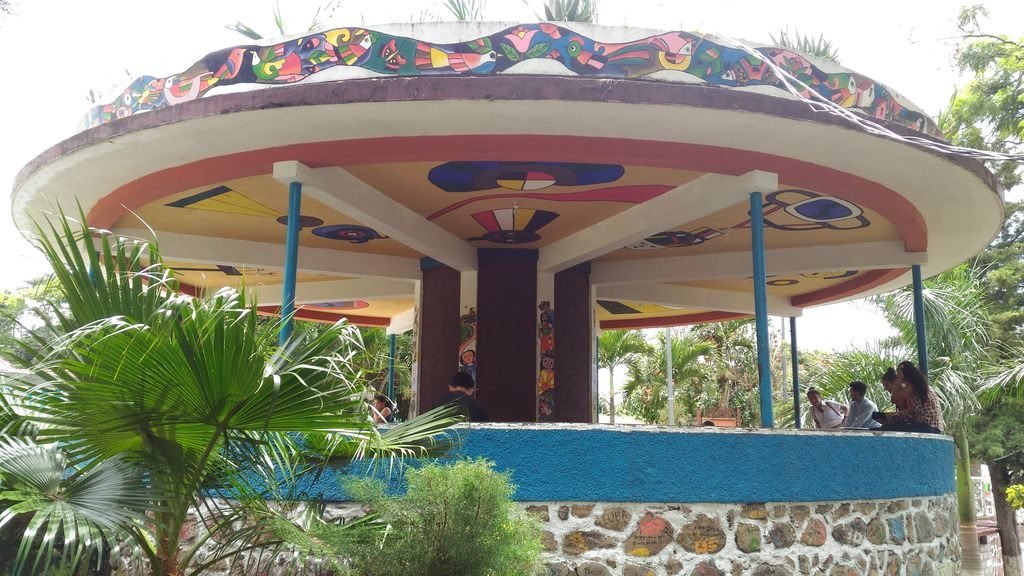 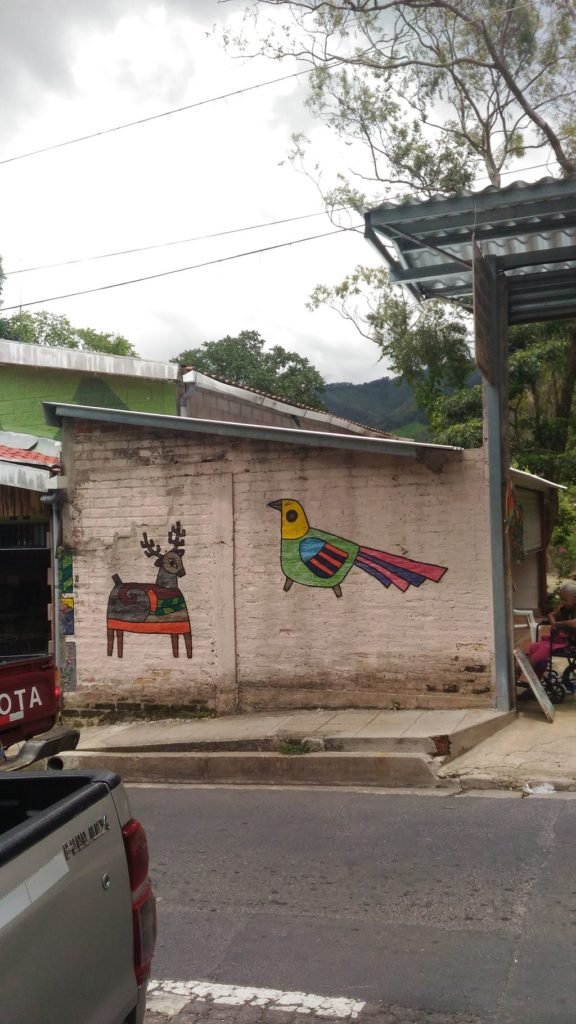 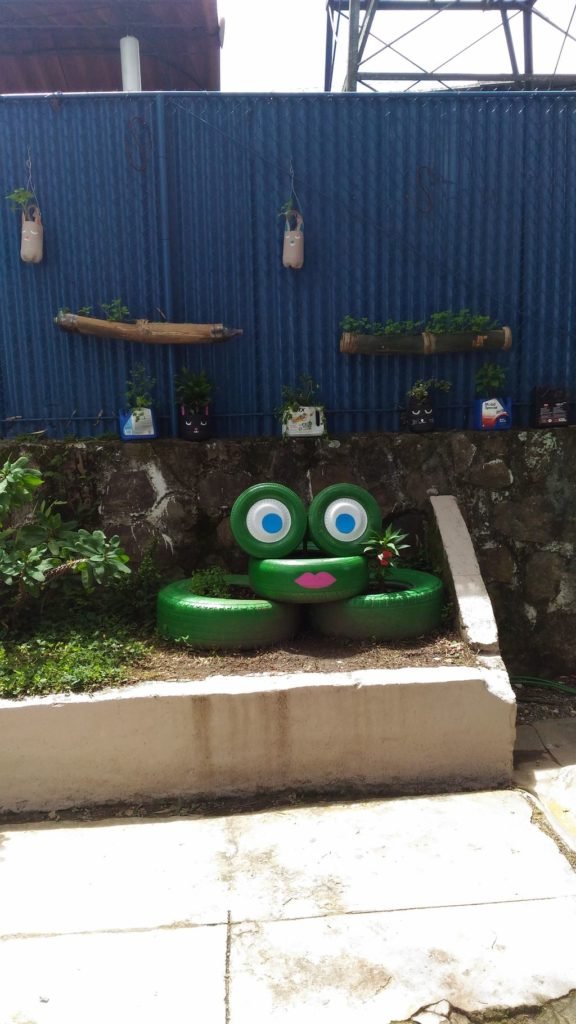